Shiki Tademaru (,, Tademaru Shiki?) is a half-Arachne, half-human hybrid. He is an employee of the Kemono office.

Shiki is a teenage boy with light purple hair. He wears a purple jacket with a black web motif on it. The sleeves and collar are black with white stripes. He wears white pants with red shoes. 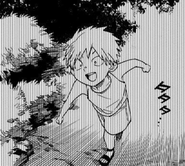 Shiki as a child

Shiki initially comes off as a bully, holding his age of one year over Kabane's head as an authority, and telling the other boy they aren't friends because they're both hybrids. But this is shown to only be a facade, as he shows surprise at Kabane never having had pizza, and laughing when the other first had trouble trying it. But as Akira says, he's only self-conscious due to the fact another hybrid sits under the same roof as him.

When on a job, he can see things in a calm and cautious manner. He is also able to judge and react to things in a fast manner, like using his thread to protect him and Akira from Kon's attacks. However, he can also be seen with a short temper. When faced with intimidating enemies, he has the tendency to freeze up but always manages to defeat his enemy.

Up until he came to Inugami's detective agency and before his uncle took care of him, he lived in Kinshi-Go in the Gunma Prefecture with his mother. [2]

Because Shiki is half-Archane he posses some of the species abilities:

Retrieved from "https://kemonojihen.fandom.com/wiki/Shiki_Tademaru?oldid=3025"
Community content is available under CC-BY-SA unless otherwise noted.